FJP, in partnership with criminologists from Florida International University and Loyola University at Chicago and with support from the John D. and Catherine T. MacArthur Foundation’s Safety & Justice Challenge, announced the launch of Prosecutorial Performance Indicators (PPIs). The PPIs are 55 new measures of performance that challenge and expand traditional measures of success in the field of prosecution. Historically, prosecutorial performance has been measured by metrics such as number of cases filed, conviction rates, and sentence length, thereby encouraging tough-on-crime policies and feeding mass incarceration. Amid widespread protests and calls for reimagining public safety, the PPIs provide a timely shift toward priorities of safety, community well-being, justice and fairness. Read the release and visit the PPI website. 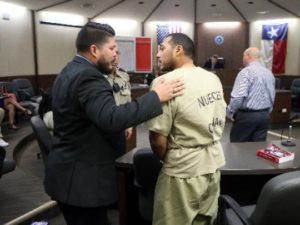 Discovery practices have a profound effect on ensuring fair case outcomes, expeditious resolution of cases, enhanced police accountability, and compliance with constitutional mandates. This FJP “Issues at a Glance” brief outlines how prosecution and defense alike benefit from open and early discovery. The brief offers a range of tools — from simple checklists to electronic Brady databases, to supervision and random audits — to ensure prosecutors share all relevant information in a timely and efficient manner, ultimately improving trust and accountability in the justice system.

“I want the defense to have everything I have.”
– Milwaukee county (WI) District Attorney John Chisholm

“As a prosecutor, you can’t waiver on integrity and justice, because…someone’s life and liberty is at stake.”
– St. Louis City Circuit Attorney Kim Gardner

Effective “Conviction Integrity Units” (CIUs) and other internal accountability mechanisms are a key part not only of reviewing potentially wrongful convictions, but also of learning from past errors and reducing the likelihood of future problems. This FJP “Issues at a Glance” brief addresses how prosecutors can improve office culture, strengthen community trust, and achieve the highest possible integrity in case outcomes by creating effective CIUs and implementing other policies that enhance transparency and accountability.

“History has shown that when folks get in office and try to pursue convictions rather than justice, mistakes are made. Wrong people are prosecuted.”
– Wyandotte County (Kansas City, KS) District Attorney Mark Dupree

A recent study of 2,400 exonerations from 1989-2019 found that prosecutorial misconduct played a role in 30 percent of cases. Elected prosecutors have a responsibility to prevent misconduct in their offices as well as to proactively address past injustices by establishing Conviction Integrity Units that work with defense counsel and innocence organizations to review prior convictions. In this op-ed in NBC Think, Innocence Project co-founder Barry Scheck and FJP Executive Director Miriam Krinsky discuss the critical role prosecutors play in determining whether an innocent person ends up – or stays – behind bars.

“As [a] wave of new leadership enters office, those elected must remember that they have not just been entrusted to prevent future harm — they must also work to undo the damage their offices have already done. That begins by identifying wrongful convictions stemming from bad science, bias or misconduct by police or their own predecessors, and then moving to exonerate those affected.”

“For too long, prosecutor’s offices have been reluctant to use data to identify problems and improve their work. By using Prosecutorial Performance Indicators, prosecutors can begin to understand the impact of their decisions, measure their own success, and ensure that their work truly promotes a just system for all.”

Against the backdrop of the recent murders of George Floyd, Breonna Taylor and others, 76 current and former elected prosecutors and law enforcement leaders from around the nation filed an amicus brief highlighting the deeply frayed relationships between law enforcement and the communities they serve and elevating the urgent need for transparent, inclusive and thoughtful reform of policing policies. In the brief, amici argue that the Presidential Commission on Law Enforcement and the Administration of Justice reflects anything but this open and balanced starting point and has failed to comply with the requirements of the Federal Advisory Committee Act. The brief concludes that this “flawed process … is the last thing a nation in crisis needs at this critical moment in time.” For more read the release and brief.

“Law enforcement must earn the public’s trust…But that is only possible when law enforcement officials pair their words with a meaningful commitment to learning from, and partnering with, the communities they serve.”

A prosecutor has a duty to investigate and remedy injustice. That’s why elected prosecutors from across the country have repeatedly filed amicus curiae briefs – in the trial court, on appeal, and in the Missouri State Supreme Court – to secure justice for Lamar Johnson, a man with a credible claim of innocence who has spent nearly 25 years behind bars. The briefs have urged Missouri Courts to not only grant Johnson a new trial, but, more broadly, to respect the power and obligation of prosecutors to investigate and remedy cases where wrongful convictions have occurred. For more, read the press release and full brief submitted by 45 elected prosecutors to the state Supreme Court. Also read the original release and brief submitted to trial court and the appellate brief and release.

“Allowing politics to determine whether relief is granted or denied in a case where there are credible claims of innocence and serious concerns about prosecutorial and law enforcement misconduct is unconscionable.”
– 13th Judicial Circuit (Tampa, FL) State Attorney Andrew Warren

A staggering 86% of convictions of individuals later exonerated for crimes that occurred before they turned 14 are based on false confessions, often obtained through coercive interrogation tactics. In a new Washington Post op-ed, Baltimore City State’s Attorney Marilyn Mosby and FJP Executive Director Miriam Krinsky discuss why such tactics must end and why reforms are needed in the questioning of young people to protect the integrity of the justice system.

“Prosecutors have a duty to administer justice with integrity. When a tragic injustice occurs, we must work to ensure those mistakes never happen again.”

Elected prosecutors have an obligation to protect the integrity of the criminal justice process. The jailhouse informant scandal in Orange County, California – where authorities paid hundreds of thousands of dollars to jailhouse informants who coerced confessions from witnesses with threats of violence and intimidation – is illustrative of the deep concerns with these practices. In a USA Today op-ed, FJP Executive Director Miriam Krinsky and former Superintendent of the New Orleans Police Department Ronal Serpas discuss the dangers of jailhouse informant programs and the need for prosecutors to focus on fairness and the integrity of the justice system – rather than simply “winning” convictions – to protect and promote public trust.

“Wrongful Convictions Are Disturbingly Common, and Prosecutors Have Duty To Fix Injustice”

Prosecutors have a duty to investigate and correct miscarriages of justice. In a USA Today op-ed, FJP Executive Director Miriam Krinsky shares how shockingly common wrongful convictions are and why we need a mechanism to address claims of innocence and remedy cases where the integrity of the process has been compromised. Additionally, she recounts the human toll of wrongful convictions, lessons learned from these cases, and the vital importance of conviction review units as a vehicle for change.

FJP Executive Director Miriam Krinsky writes about a unique convening event hosted by FJP in partnership with the Innocence Project, Penn Law’s Quattrone Center for the Fair Administration of Justice, Witness to Innocence, and NYU’s Center on the Administration of Criminal Law, where elected prosecutors came together to discuss best practices for promoting accountability and for the design of conviction integrity and review units. These units are designed to address and investigate innocence claims and should also seek to proactively guard against future improper convictions. Click here to read more.

“Conviction integrity units should not just aim to redress wrongful convictions; they should also seek to establish and maintain the confidence of their communities in the integrity of the justice system. To do so certainly requires unlocking a cell door and erasing a record when an injustice has occurred. Yet it also requires the courage to assess and address system weaknesses and practices.”
– Fair and Just Prosecution Executive Director Miriam Krinsky

Importance and Implications of Prosecutorial Discretion and Independence

This document put out by the King County (Seattle, WA) Prosecuting Attorney’s Office sets forth an office-wide Brady Protocol, specifying practices for disclosure of evidence.

"My primary concern, in any case, is doing the right thing, no matter the optics, the political pressure, or any external considerations.”

“We need to be transparent and held accountable.”

“Denying relief in a case where there are credible claims of innocence and serious concerns about prosecutorial and law enforcement misconduct undermines the integrity of the system of justice we are sworn to uphold as prosecutors.”