Around 97% of federal convictions and 94% of state felony convictions are obtained through a guilty plea, but plea bargaining often involves coercive tactics that have fueled over-incarceration, and the plea process has hardly any oversight in the United States. This “Issues at a Glance’ brief from FJP and Fair Trials describes how elected prosecutors can take immediate action to ensure their offices’ plea bargaining practices promote and protect due process, fairness, and transparency. For more, read the release on this brief.

“All too often in the United States, the plea process implicates due process concerns, fuels mass incarceration and exacerbates racial disparities. Prosecutors have the power to make plea bargaining more fair and just, and we need more leaders to step up and take action.”
– FJP Executive Director Miriam Krinsky

A bipartisan group of over 100 respected leaders in prosecution and law enforcement sent a letter to President Joe Biden urging him to establish a Presidential Task Force on 21st Century Prosecution that would catalyze innovation in the criminal legal system nationwide and chart a path to greater justice and equity in all communities. The letter coincided with the release of Fair and Just Prosecution’s new white paper, “The Case for a Presidential Task Force on 21st Century Prosecution,” which outlines why this effort is urgent for ending mass incarceration and fortifying trust in our justice system. For more, read the letter, white paper, and release, as well as this letter to President Biden in support of the task force from crime survivors, victim assistance professionals, and allied providers.

“The American people have demanded change. The rallying cry to transform our criminal legal system stretches from the streets to across the political aisle. We urge the Biden-Harris Administration to seize this moment and create a Presidential Task Force on 21st Century Prosecution soon; our communities are urging us all to act.”

“Being tougher on crime is easy…. Being smart on crime is a challenge.”
-Nueces County (Corpus Christi, TX) District Attorney Mark Gonzalez

Local prosecutors can help make communities safer and the justice system fairer by supporting the elimination of a money bail system, which penalizes defendants who cannot afford to post bond. Prosecutors should, instead, support a presumption of release where individuals present no risk of flight or danger to the community. This FJP “Issues at a Glance” brief discusses the prosecutor’s role in reforming the money bail system to reduce pretrial incarceration and its potentially counterproductive effect on public safety and recidivism.

Prosecutors can help reduce overly punitive responses to marijuana and other drug charges. This FJP “Issues at a Glance” brief discusses the prosecutor’s role in marijuana policy reform and provides guidance to prosecutors considering approaches that promote a more equitable justice system, save resources and avoid criminalizing individuals struggling with drug addiction. The brief includes recommendations for prosecutors’ offices based on the wide spectrum of approaches in place around the nation — from cite-and-release programs to the legalization of marijuana.

For other FJP “Issues at a Glance” Briefs, click here.

How (Some) Prosecutors Changed the Face of Justice in 2021

Reform-minded prosecutors represent around 20 percent of Americans, and the strength of this movement grows with each election cycle as voters increasingly realize that the outdated policies of mass incarceration have deepened racial inequality, placed enormous burdens on taxpayers, and failed to keep communities safe. In an op-ed in The Crime Report, FJP Executive Director Miriam Krinsky describes how reform-minded prosecutors elected in 2020 have made their mark in their first year in office and calls on President Biden to create a Task Force on 21st Century Prosecution to solidify, support, and expand on this success.

“As we usher in 2022, inspiring reform-minded prosecutors will continue to advance a more equitable and just criminal legal system. We hope the Biden Administration will provide support for this work in the year to come and that communities will continue to pay attention to their local prosecutors and grow this movement as it propels meaningful and lasting change.”

Los Angeles County District Attorney George Gascón’s decision to eliminate most sentencing enhancements has been met with fierce backlash from proponents of “tough-on-crime” policies who continue to sell the public a false promise that more punishment means more safety. In a Los Angeles Times op-ed, former LA County District Attorneys Gil Garcetti and Ira Reiner and FJP Executive Director Miriam Krinsky discuss how DA Gascón’s policies – which are backed by the voters – will make communities safer, decrease burdens on taxpayers, and contribute to a fairer system for all.

“Those committed to the ‘tough-on-crime’ policies of the past must recognize that more incarceration is not the answer, and that continuing to obstruct this new vision of justice only makes us all less safe.”

Historically, prosecutors have been significantly overrepresented in the federal judiciary, but President Biden is making important inroads in diversifying the bench. In this Crime Report op-ed, Dallas County District Attorney John Creuzot and Contra Costa County District Attorney Diana Becton – both former judges – join FJP Executive Director Miriam Krinsky to highlight why having more public defenders in the federal judiciary is essential to a fair and equitable criminal legal system.

“Those of us who care about fixing our broken criminal legal system should offer our enthusiastic support for these efforts to nominate judges from all parts of our profession, and call out unfair attacks when they come, so that we can build the balanced and diverse judiciary that communities deserve and that benefits all of us.”

Voters want progressive prosecutors. Biden must follow through on promise to guide reform.

Across the country, communities aren’t buying the “tough on crime” policies of the past and are instead doubling down on programs and leaders confronting the causes of crime and investing in preventing violence before it occurs. In this USA Today op-ed, Minnesota Attorney General Keith Ellison, former U.S. Attorney Joyce Vance, and FJP Executive Director Miriam Krinsky discuss why President Biden must create lasting change to our criminal legal system by building on this community-based movement and investing in prosecution reform through a Presidential Task Force on 21st Century Prosecution.

“By providing the nation’s 2,400 local and state prosecutors a deeper understanding of the harm of mass incarceration and data-based mechanisms for change, the administration could push our criminal legal system to create more just policies and address its inherent systemic inequities.”

How Joe Biden can root out racism in criminal justice

After an election that delivered Joe Biden a historic win and saw voters in red and blue states alike back criminal justice reforms, the president-elect has a mandate to implement systemic change. On day one, the new administration can immediately enact a number of policies that will significantly advance racial justice, especially in the areas of drug policy, juvenile justice, second chances, and police accountability. In this CNN op-ed, District of Columbia Attorney General Karl Racine and FJP Executive Director Miriam Krinsky share how President-elect Biden can make full use of his authority to usher in a new vision of justice, starting on day one.

“For decades, elected leaders sought to portray themselves as ‘tough on crime’ through misguided choices…that eroded trust with communities, while cementing racial oppression and mass incarceration. This election revealed that many people now see these policies as grave errors.” 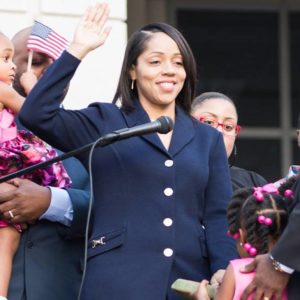 “There’s a Wave of New Prosecutors. And They Mean Justice.”

“Fairness and safety aren’t a tradeoff. They complement each other. This new corps of prosecutors can lead the way toward doing more justice with more mercy.”
– FJP EXECUTIVE DIRECTOR MIRIAM KRINSKY AND NEW YORK TIMES MAGAZINE STAFF WRITER EMILY BAZELON

“These district attorneys realize what the last 30 years of criminal justice practice has revealed: harsh sentences do not deter crime, and instead, disproportionately impact the poor and people of color.”

“Against the Trump Tide”

“Law and the New Order: A Fresh Wave of District Attorneys is Redefining Justice”

“Prosecutors Take On the Department of Justice”

Interview with 16th Circuit Court (MS) District Attorney Scott Colom, among others, that touches on the letter prosecutive leaders sent to Attorney General Jeff Sessions, the “collateral damage” of harsh charging and tough sentencing policies, and concerns with mandatory minimums. Colom stresses the need for rehabilitation over incarceration for those struggling with substance use disorders and notes that it takes “more courage” and work to be smart on crime. Read more here.

“Meet a New Breed of Prosecutor”

“Not all of society’s most complicated issues can be solved in a courtroom or with a prison cell.”
– King County (Seattle, WA) Prosecuting Attorney Dan Satterberg

“The 21st century prosecutor is focused on building a new vision for the justice system grounded in fairness, compassion and common sense.”

“When you get caught in this volley of ‘soft on crime,’ ‘hard on crime,’ you lose the concept of just being right on crime…. Let’s just be right. It’s not a favor to criminals—it’s just doing right by the communities we serve.”

"Our job is not just to prosecute and not just to put people in jail… We are here to work with you, to make you safer. We work for you.”